The WILDSAM Field Guides are more than just a standard tourist checklist of things to see, do, and eat. The pocket-sized guidebooks, which have been created for Austin, San Francisco, Nashville and now Detroit are part of “a new American series with a bygone sense of place” designed to get at “the soul of a city.” 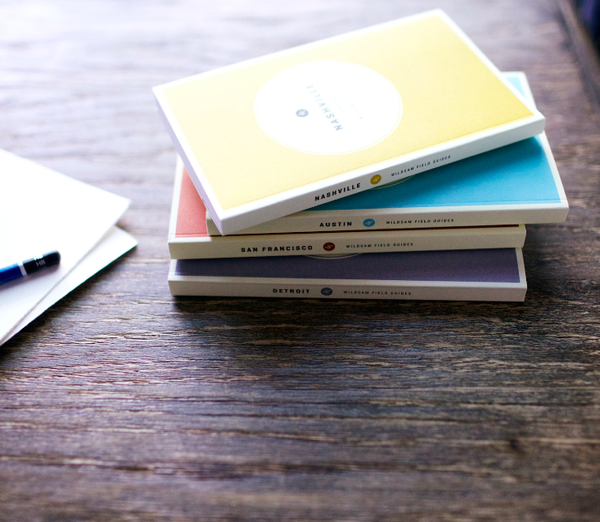 The Detroit guide does have a concise list of suggestions that are pretty spot on, but also focuses on the history of Detroit, the people that create the social fabric here, and even includes essays and poems that capture our city in transition. Reading this guide, you get a sense of the way Detroit feels. Whether you are breezing through the city for a weekend or live here now, the guide is both a great reference and homage to the the things that make our city tick. I met Taylor Bruce, the writer/entrepreneur who founded WILDSAM at the Detroit guide launch party at Shinola during summer. I was fortunate to catch back up with him and ask him a few questions about how he put the guide together.

How did you get the idea for WILDSAM Field Guides in the first place?

The short answer is this: I love to travel but I really don’t care much for travel guides. That logic didn’t add up for me, so a couple years back, we decided to make a book for folks like us, who’d rather read a short story about Detroit than get a list of 25 places for a coney. But the long answer is more about my fondness for writing and storytelling. I spent about eight years in magazines, mostly lifestyle and travel pubs, before I took a year and a half to do a Masters in fiction writing at Brooklyn College. Towards the end of the program, this idea for a city “field guide” … part memoir, part journalism, part almanac … sort of surfaced on its own. At the heart of it was a single aim: To tell true stories of place.

What made Detroit a good city for a WILDSAM Field Guide?

We see cities as this compelling mix of the broken and the beautiful. That’s just life. A double-edged experience of dark and light. So when we cover a city, we look to capture the whole place. The inspiring stuff, classic diners, dreamy green spaces, soaring architecture. But also the hard stuff, the folks living on the margins, complex urban wounds like racism and abandoned neighborhoods. The broken and the beautiful, there’s a kinship between the two. So Detroit was a city that actually was a dream for WILDSAM.

How did you find the Detroiters who helped you put together the guide?

Often, there’s the friends-of-friends factor. A few pals in San Francisco and Austin immediately connected us to their Detroit buds. But once we visited Detroit, we just started meeting people. Detroit is an incredibly friendly city. Our first night in town, a few guys invited us to dinner at Green Dot. And our third trip, we used Uber for three days and every driver wanted to take us on a tour of the city. And then wouldn’t let us pay!

Was there anything different about creating a field guide in Detroit compared to the other cities?

Honestly, the first thing that comes to mind is the temperature! It’s a cold city in January and February. But like we say in the opening to the field guide, there was something that felt right about experiencing the Detroit winter. Seeing the city at zero degrees. The other thing I’d say about doing Detroit is the perception factor. No city in America get the starkly doomsday press that Detroit does. To be honest, those headlines just made us want to explore the true city even more.

What cities are next?

Will you be back to Detroit anytime soon? If so, what for?

In a dreamworld, I’d be back for Game 7 of the World Series. Go Tigers!

If you are interested in a copy, The guide is available online at the WILDSAM website and also at the Shinola store in Midtown Detroit.

More from this show

PODCAST: U of M, Pistons & Lions w/ Fletcher Sharpe; How Frame in Hazel Park is dealing with the pandemic

Today’s show is in two parts: First, Fletcher Sharpe joins Jer to talk U of M football, how the Pistons look and the addition of...

MoGo, the bike-share system that launched a network of stations in Detroit in 2017, will launch its expansion into five northern inner-ring...

“Cooking With Spags” Returns On Friday With A New Cooking Video

Have you been doing a lot of cooking at home since the Stay Home, Stay Safe order went into effect? I know we have been. So, we figured why...

We figured during this time when everyone’s cooped up, we’d share something to help you get you through the stay in place order...

Michael Zadoorian On His New Book, “The Narcissism Of Small Differences”

Ferndale Author Michael Zadoorian joins us to talk about his new book “The Narcissism of Small Differences,” that beyond being...

Look, this has been a busy, long week. Lots of things happening. Serious conversations. Big issues. But today’s podcast is not that...