Book Gives Tips On How Not To Be A Dumb Criminal

Krystal Banks got into the bail bonds business eighteen years ago, right out of high school.

Since then, she’s learned how the courts work in Southeastern Michigan, and began giving her clients tips on how to protect their rights and better deal with the system.

Banks said, “I found that, oh, just giving them a little bit of knowledge changed their outcomes. It was really helping them.”

Now Banks is an author with Don’t Be a Dumb Criminal.

The book breaks down the workings of the police and courts with simple, straight-talking language Banks said is easy for even a fifth grader to comprehend.

Banks said if you need an attorney, you should shop for one like you’re buying a house – don’t buy the first one you see.

She suggests contacting at least five lawyers before making a decision.

Banks stressed that people need to know their Miranda rights—to remain silent because microphones are listening.

When you are arrested, it’s being recorded,” Banks said. “When you go to jail it’s recorded; when you’re in the cell with an inmate, a lot of times it’s being recorded, or they can use that inmate as a witness. When you’re calling your family members and talking about it, it’s all recorded, and they’re going to use it against you.”

Banks says that thousands of copies of Don’t Be a Dumb Criminal and her other version of the book with a racier title called Don’t Be a Dumb*** Criminal are now circulating since it came out last summer.

Church groups, youth groups and even the state prison systems’ re-entry program use it to help former prisoners.

LUCK, Inc., an agency in Detroit that works with parolees and returning citizens has been using the book.

Bueno recalls reading Chess for Dummies when he took up the game and likens it to Banks’ book, “It’s kind of like ‘Law for Dummies’ you know?”

“This is material everybody should know, let alone someone who’s caught up in the criminal justice system,” Bueno said, “The layperson doesn’t know a lot of this stuff. I know this without a shadow of a doubt.” 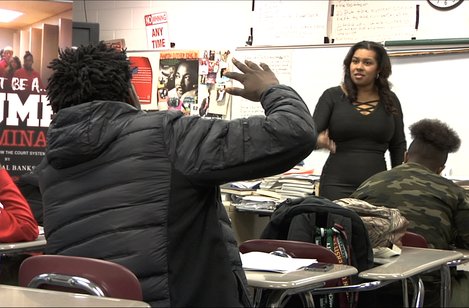 Krystal Banks in class.© Randy Holloway EntertainmentAlong with the book, Banks created a workbook to go with it.

Initially, Jones had concerns the workbook might be seen as a guide on how to be a better criminal.

Once he looked it over, Jones said, “I really took away things that can get you into trouble and you don’t even know it, and here are your rights.”

Jones said students take basic law and civics classes, but the workbook presented a different way to teach important information, so she had Banks present it in class.

“The students were very receptive to it,” Jones said. “In a predominantly African American community, it’s important for them to be aware of what rights they do have when they’re coming in contact with law enforcement and the criminal justice system.”

Banks presented scenarios for the students to consider, like how using a Bridge card the wrong way could get them in trouble.

“They’re like, ‘you mean to tell me my mom sends me to the corner store to buy some food even those Bridge cards are for me, it’s illegal?’” Yes, Banks said. “That’s welfare fraud.”

While criminal behavior can be glorified in some media, Banks said young people need to get smart about what they post online.

“You have to realize—these police officers, judges, prosecutors and attorneys, they go to regular meetings to be updated with the law. We don’t have this information. We don’t know this,” Banks said, “I want to get everybody on the same level so they have a fair shake.”

For more about the Don’t Be A Dumb Criminal,  learn more at www.dontbeadumbcriminal.com.

More from this show

“If you open up a building next to a Dan Gilbert development that’s a good thing. There’s more people on the sidewalk...

In Ferndale, Angst Rises Alongside Housing Prices And New Developments

My wife and I talk a lot lately about what to do with our house. We just passed our 13th anniversary of buying our first home here in...

As far as Detroit businesses go, Sister Pie may just be having the best year ever. Owner Lisa Ludwinski blew judges away at this year’s...

What Will Detroit Do With Garner And Brown?

Obviously the history, social fabric, and current issues facing Detroit as a region make it ripe for discussion around the Eric Garner and...

When Christina York and Marjorie Knepp arrived at Startup Weekend Detroit, they weren’t sure what to expect. The pair ventured to the...

Andrey Douthard had a vision of starting a record store and label. At 28, he’s another one of the Detroit-epreneurs that is trying to make...

Book Gives Tips On How Not To Be A Dumb Criminal